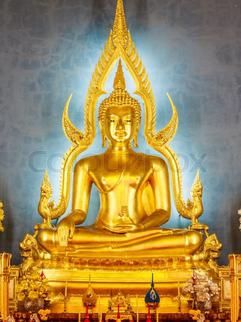 Back
However, there was one temple that left an indelible impression in our hearts and minds. It is called the Temple of the Golden Buddha. The temple itself is very small, probably no larger than thirty feet by thirty feet. But as we entered, we were stunned by the presence of a ten-and-a-half-foot tall, solid-gold Buddha. It weighs over two-and a half tons and is valued at approximately one hundred and ninety-six million dollars! It was quite an awesome sight - the kindly gentle, yet imposing solid-gold Buddha smiling down at us.
As we immersed ourselves in the normal sightseeing tasks(taking pictures while oohing and ahhing over the statue), I walked over to a glass case that contained a large piece of clay about eight inches thick and twelve inches wide. Next to the glass case was a typewritten page describing the history of this magnificent piece of art.
Back in 1957 a group of monks from a monastery had to relocate a clay Buddha from their temple to a new location.   The monastery was to be relocated to make room for the development of a highway through Bangkok. When the crane began to lift the giant idol, the weight of it was so tremendous that it began to crack. What's more, rain began to fall. The head monk, who was concerned about damage to the sacred Buddha, decided to lower the statue back to the ground and cover it with a large canvas tarp to protect it from the rain.
Later that evening the head monk went to check on the Buddha. He shined his flashlight under the tarp to see if the Buddha was staying dry. As the light reached the crack, he noticed a little gleam shining back and thought it strange. As he took a closer look at this gleam of light, he wondered if there might be something underneath the clay.
He went to fetch a chisel and hammer from the monastery and began to chip away at the clay. As he knocked off shards of clay, the little gleam grew brighter and bigger. Many hours of labor went by before the monk stood face to face with the extraordinary solid-gold Buddha.
Historians believe that several hundred years before the head monk's discovery, the Burmese army was about to invade Thailand (then called Siam). The Siamese monks realizing that their country would soon be attacked, covered their precious golden Buddha with an outer covering of clay in order to keep their treasure from being looted by the Burmese. Unfortunately, it appears that the Burmese slaughtered all the Siamese monks, and the well-kept secret of the golden Buddha remained intact until that fateful day in 1957.
As we flew home on Cathay Pacific Airlines I began to think to myself, "We are all like the clay Buddha covered with a shell of hardness created out of fear, and yet underneath each of us is a 'golden Buddha,' a 'golden Christ' or a 'golden essence,' which is our real self.

Somewhere along the way, between the ages of two and nine, we begin to cover up our 'golden essence,' our natural self.   Much like the monk with the hammer and the chisel, our task now is to discover our true essence once again."
This story was written by Jack Canfield, in Chicken Soup for the Soul, and it is one of my very favorite stories.  I especially like it, because it so beautifully illustrates how Rapid Eye Technology works, in removing the layers of whatever it is that hides the golden buddha within each of us.   ~ Julia
In the fall of 1988 my wife Georgia and I were invited  to give a presentation of self-esteem and peak performance at a conference in Hong Kong. Since we had never been to the Far East before, we decided to extend our trip and visit Thailand.
When we arrived in Bangkok, we decided to take a tour of the city's most famous Buddhist temples. Along with our interpreter and driver, Georgia and I visited numerous Buddhist temples that day, but after a while they all began to blur in our memories.